Orange wine has generated a lot of buzz in the last few years and is very popular with the natural wine community, but what is it and is it any good? Well, that all depends on your how adventurous your palate is.

Let’s start with what it is and how it’s made. Although you might think it is a new style of wine, it is actually very old. In fact, its origins date back to antiquity, having originated in the areas of Georgia (the country, not the state), Slovenia and the Fruili region of Northern Italy. The style was lost from the winemaking world through decades of wars, political instability, Communist blocks, and shifting borders. In the 1990s, Georgia and Solvenia gained independence from the Soviet Union and opened their borders to the West. It was then that winemakers in Italy, Slovenia and Georgia started rediscovering this ancient wine style and bringing it to the rest of the world.orange,

Orange wine is essentially made using white wine grapes that are produced like a red wine.

White wine is generally made by crushing white grapes, then draining the juice off the grape skins almost immediately. Since the skins contain tannins, color and other compounds, winemakers want to minimize skin contact so those bitter tannic flavors don’t mask the fruitiness of the wine. Fermentation usually takes place in closed stainless steel or concrete tanks, which impart no flavors into the wine, and the juice is often blanketed with sulfur dioxide to protect it from oxygen. This results in a lemon-colored white wine that is fresh and fruity (think Sauvignon Blanc).

In orange wines, the white grapes are crushed, but rather than immediately draining off the juice, the juice remains in contact with the skins for an extended period of time – a week or even up to a year. Since orange winemakers often do not use sulfur dioxide, the wines may be exposed to some amount of oxygen, which further changes the flavor and color of the wine.

The ancient method of orange winemaking is to bury a terracotta vessel, called a qvevri, in the ground up to its neck, and leave the crushed grapes and skins inside to ferment naturally. This process is still used in some places today, but today’s orange wines are also fermented in stainless steel tanks, oak, concrete or clay vessels called amphorae. 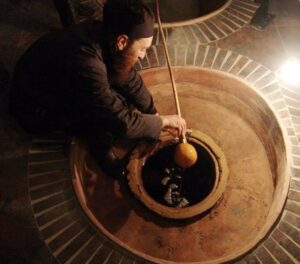 This “skin-contact” process of winemaking not only turns the wine a color ranging from pink to amber to bright orange, but also results in a wine that can be surprisingly tannic, nutty and savory along with some sour or fruit flavors.

It can be difficult to find orange wines at any local wine shop outside of a major metropolitan area. These types of wines are still a niche market, even if they are growing in popularity amongst the younger drinkers who are more adventurous and have palates attuned to sour beer and kombucha flavors. If you’re interested in tasting a orange wine, you may have to resort to visiting a natural wine bar the next time you’re in a city, or ordering a bottle online at natural wine shops like Chambers Street and Thirst Wine Merchants in Brooklyn, NY.

Who is going to be drinking these with me?! I have

Celebrating a ton of things tonight with an extra

OMG, it’s done!!! I hope I pass because I NEVER

The day has finally arrived! I’m in Napa celebra

T minus 2 days to exam time. The cramming and tast

My Sunday! Exam is 10 days away and I’m cramming