My first CELEBRITY WINE THROWDOWN was a rousing success!!! I hosted the event in my wine cellar, serving eight curated celebrity wines. I paired the wines (2 rosés, 2 sauvignon blancs, 2 cabernet sauvignons, and two red blends) and competed them head-to-head in a tournament-style bracket, until we determined a single winning wine. There were plenty of fun and games along the way with points scored on celebrity trivia, picking out specific flavors and aromas in the wines, and coming up with the most unique tasting notes.

Although all of wines were enjoyable and we had a lot of fun tasting them, in life there are winners and losers. In reverse order, the results were…

My guests had a hard time deciding between the Hampton Water and the Miraval. It came down to personal preference as to who liked the oak influence and who preferred the bright fruit. However, the edge ended up going to Hampton Water.

4. Message in a Bottle by Sting, $18, Sangiovese blend, Tuscany

Ultimately, it came down to a Cabernet face-off between John Legend’s LVE and Kyle MacLachlan’s Pursued by Bear. My guests flipped their votes back and forth for a while before settling on a winner. Both wines are in the $55-60 price range with celebrity owners that are passionate and involved in their wine projects. The LVE is a full-bodied, bold and intense Napa Valley Cab, but it was beaten out by MacLachlan’s big, yet more refined, Columbia Valley, WA Cabernet. Pursued by Bear was described as smooth and easy to polish off an entire bottle in one sitting, whereas my guests felt the LVE was delicious, but needed to be paired with food to balance some of its intensity.

In a very close third place was Graham Norton’s Sauvignon Blanc. All of my guests had a personal preference for big reds, but if they were white wine drinkers, Graham Norton’s wine may very well have carried the day. It is an excellent example of a quintessential New Zealand Sauvignon Blanc, with tropical fruit flavors that are balanced by bright acidity and a grassy character. This is an unbeatable value at $15. 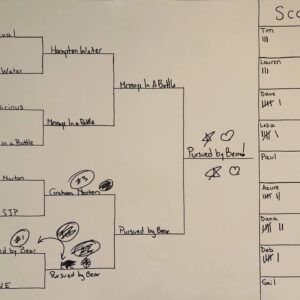 Stay tuned for Volume 2 of the CELEBRITY WINE THROWDOWN. I have more celebrity bottles that will be tasted soon!!!

Who is going to be drinking these with me?! I have

Celebrating a ton of things tonight with an extra

OMG, it’s done!!! I hope I pass because I NEVER

The day has finally arrived! I’m in Napa celebra

T minus 2 days to exam time. The cramming and tast

My Sunday! Exam is 10 days away and I’m cramming